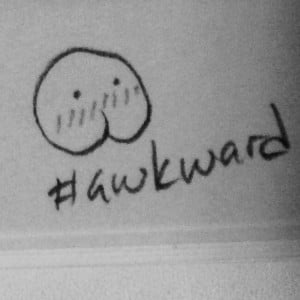 Three days ago, the Bloggess unwittingly instigated a flood of people sharing their most awkward moments.

And it was wonderful.

Mine didn’t make it into her blog post later because I could not for the life of me figure out which tweet everyone was replying to (my Microsoft Surface may be handy, but its Twitter app leaves much to be desired), but that didn’t matter. What struck me was how funny all these stories are, and how recognizable.

I don’t know about you, but sometimes I want to hold onto my awkward moments and never tell anyone about them, ever. It’s just too embarrassing.

But then there everyone was, telling their stories, and there I was, laughing and enjoying every minute of it. The thoughts that went through my mind weren’t “Oh, wow. That person’s really stupid” or “why are they saying this? I don’t need to hear it.”

When I shared my own little stories, the most surprising thing was how good I felt doing it. Yep, I did these things. They were awkward. They were ridiculous. Do I wish I could have done them differently? You bet. Am I done with them? You bet.

We can be so afraid that, if we let that secret out, that it will keep us from the happiness we want.

But let me let you in on the real secret-that’s-not-actually-a-secret:

And it’s a much happier place when we allow ourselves the grace to get back up, laugh about it, and keep right on going.

Need help with that laughter? The Bloggess has got you covered.