Ladies and Gentlemen, it’s time for:

12 Questions with Thea! (Because 20 questions is just too mainstream) 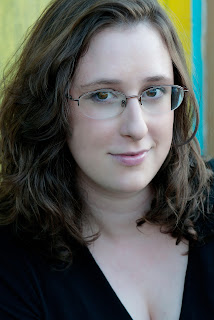 Why: Not only is she so awesome that she shares a birthday with Madeleine L’Engle, but her first book is out, and it’s fabulous!

Book blurb: “Ivy has always been afraid of mirrors, but she never knew why. Then one of them sucks her into the fairy tale Beauty and the Beast.” -from Emily’s website.

(This interview is a part of Emily’s blog tour. The next stop is tomorrow at: Robert Marion’s blog, and it’s an interview with Ivy! :D)

1) What gave you the idea for this series? (It’s got a really cool premise, btw)

I was pregnant, and I had pregnancy brain, and you don’t want to concentrate on anything when you’re that pregnant. So I wasn’t going to work on my novels, because I just couldn’t focus on it.

A friend of mine suggested that I write some short fiction for my blog. I could put it up on my blog, where anybody could read it and maybe reach some readers that way, and I felt that was a good idea. I was also shopping my book around with agents, the one that I had just finished, and the feedback that I kept getting was that my writing was too stiff. It was boring, it was flat, and when I looked back at it I was like, “oh my gosh, it is flat.”

What I did was I decided to let a fictional character take over my blog once a week, and she would write on the blog, through me, obviously, and so I needed something that I could do in one, two or three posts, and I love fairy tales, so it was kind of a good fit, and Ivy was born. She was just randomly dropped in a fairy tale and she had to just change the story to get back home (the rules are a little different from the novel). I fell in love with Ivy so much in writing these blog posts that I thought she deserved a book, and so I built the story around the initial blog posts.

2) Is Ivy based on anyone you know?

She’s kind of the person I wish I could be. I mean, she’s a lot like me. I grew up in the military, like she did. Her dad’s in the military. She’s like the snarkiest, smartest side of me, I guess. She’s way smarter than I am sometimes, and then way dumber than I am. I do have a friend, she’s fifteen, and she’s half-Asian, and she’s pretty snarky, too, and so I did think about her a lot while I was writing Ivy’s character.

3) There’s an awful lot of running in this book. Was this on purpose, or did your love of Doctor Who seep through into the pages?

Hmmm… I do love Doctor Who. Well, I run, so her experience with cross-country and that kind of thing came from my love of running, and then I have two sisters who did cross-country with my school. The running was kind of a later addition. Originally, in the first draft, she didn’t run at all and it was really boring. So.

4) Was it hard to get into character when writing, or does being a smart aleck just come naturally to you?

Sometimes, I do have to switch gears, because I’ve been chasing the kids around and then they finally go down to their nap, and I just plop in front of my computer. Usually, I can get into character by having something bad happen to Ivy, and then I ask myself: “Well, is she going to take that?” Which, of course, the answer’s no. Then I ask myself: “Well, what would she do?” And that’s how I transition from life to writing.

5) Okay, what inspired the scene with the chamber pot? That was, honestly, one of the most entertaining scenes I’ve ever read that related to human hygiene.

I realized that she needed to use the bathroom, and I was thinking about the lack of running water and how she, well, she needs a bath after all that running in the forest. But, really, she needed to go to the bathroom. It was either go in the woods, or use the chamber pot, and I think chamber pots are pretty gross, and I think I would be even more grossed out by them. That was a struggle, having to decide about risking her life out in the woods, where Beast is this horrible, horrible wild animal, just to use the bathroom? It doesn’t seem worth it. So, I used the chamber pot, and then I cut her a break and made it a flushing chamber pot.

6) You mention at the end of The Fairy Tale Trap that Beauty and the Beast is your favourite fairy tale. What distinguishes it from all the others, in your mind?

I like the rose, and how the whole story was facilitated by a single rose. I think that’s really cool. And the enchantments, where all the food is laid out in front of Beauty. I think the whole haunted/enchanted castle thing is just really fun.

7) Random question of the day: If you had a pet lizard, what would you name it?

I had a turtle once. I didn’t name it, but its name was Nebuchadnezzar. It was given to my by an old Bible teacher, and we were studying Nebuchadnezzar at the time and so the teacher gave me this little turtle.

8) What’s your favourite thing about fairy tales? (Or just fantasy in general)

I’m actually writing a guest post on someone else’s blog about how fantasy needs a good story, and how fantasy is like the chocolate part of the chocolate cake. If you have cake, you can have it without chocolate, but why? Why would you want that? The thing, I think, about fairy tales is that they have a fun, magical element to them but, deep down in the heart of it, they’re a story that you can relate to.

9) Who are your favourite author(s)? What is it about their books that gets you coming back over and over again?

I like J.K. Rowling. I received the Harry Potter books recently, so they’re on my mind.

Gail Carson Levine is the person who inspired me to write. She does a lot of fairy tale books. I just like the way that she -and J.K. does this, too- they take something that you’re familiar with and then they make it something new. We’ve all heard of elves before, but when J.K. Rowling made a house-elf, it was something new. I’ve never seen anything like it before. Gail Carson Levine, in her book Fairest, it’s a retelling of Snow White. In that story, the villain is really the mirror.

10) Why do you think that people need stories?

Things can get boring. I think it’s a way to share our own creativity with each other. I mean, we can sit around and talk about: “Well, wouldn’t it be cool if blah blah blah happened?”, but when you tell a story, you kind of see it through, and can share that vision more believably.

11) On a scale of one to ten, how excited are you for the Hunger Games movie?

12) If you could pimp any book right now (aside from your own, seeing as I’m pimping it right now), what book would it be and why?

It would be Jonathan Maberry’s book Rot & Ruin. It’s a zombie book, and I didn’t think I was a zombie person until I read that book. I’m not a blood and gore kind of girl, and I thought zombies were stupid, but I thought I should read outside the genre a little bit, and loved it. It is one of my top ten favourite books, and it’s seriously underrated.

Thanks, Emily, for such a fun interview! 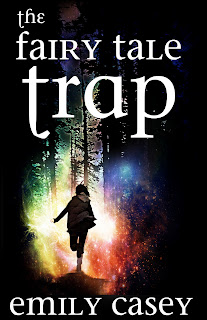 Look at that. It’s so beautiful, I could drool. Wait… ew.

If you don’t have any money (or like getting things for free), I have one tantalizing copy of The Fairy Tale Trap that you could win! :D