Becoming Who I Already Am

I found some old sketchbooks of mine that I filled up years ago, and decided I’d go through them from the very beginning and see how my drawings have changed. It felt very nostalgic, remembering drawing all those pictures. Then, as I came to the end, I realized something interesting about my writing, including this blog. In order to explain this better, I’m going to talk about horses.

First, the best picture of a horse I’ve drawn to date (please ignore how dark the signature is; I’ll make it better when my computer is more cooperative): 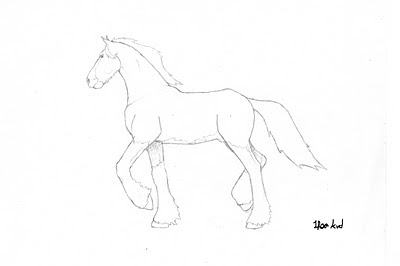 Looks pretty snazzy, doesn’t it? It took me a couple hours and lots of looking at reference pictures because I was specifically trying to draw a Clydesdale, and I really wanted to do that beautiful breed justice. I could wax poetic about how pleased I am with that drawing, despite its flaws. I remember drawing it and agonizing over where the legs were going to be because I wanted it to look like it was moving, and I wanted someone who knew horses to look at it and believe that it was moving. The trot was the easiest, so I stuck with it. There’s no colour, but I can see it in my mind’s eye: black mane and tail, gorgeous rich brown coat, white legs with smatterings of white up along the belly, a blaze down the face, and black-tipped ear. Typical mid-trot bay Clydesdale, but it’s mine.

People have seen that picture and said, “Wow, you’re so talented!”. I guess I am. Drawing is something that makes sense to me, something that I can do with ease and without worrying that my attempt at a bear is going to turn out looking like an elephant without a trunk.

In 2003, I got a sketchbook from my mom, and I immediately started drawing things in it. I’d always liked drawing, and horses were my favourite things to draw (as well as unicorns and dragons), so the first thing I did was draw some horses. I was really into Fjord horses at the time, so mine got stiff, stick-up manes this time around. I’d also figured out a new way of drawing ears, which really excited me because it looked more like an ear that came out of the head, rather than a triangle affixed to the poor animal’s skull. 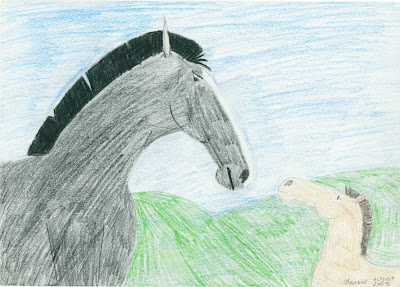 It was crap, but it was good crap. Those ears that make me cringe now made me so darn proud then that I took the page out of my sketchbook and stuck it in a place of honour in the pocket of said sketchbook. Also, note the nostrils. Those are some sexy nostrils. I had only months before realized that horse nostrils weren’t just these oval holes in the head, but actually had their very own shape. It was just as revolutionary an idea as the ears, and the realization about a year prior that the nostrils were ovals rather than circles.

Seriously, I was on the cutting edge of my understanding of equine anatomy.

Here’s another picture done a couple months later (to show off my skillz with the rest of the body): 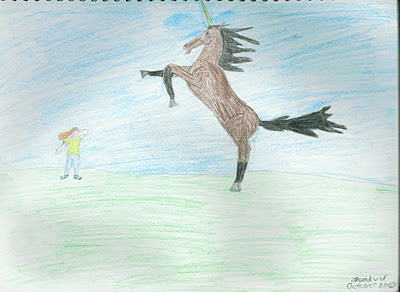 See the funny little ridge on the unicorn’s head? Between the last picture and this, I had finally figured out that horses have bone ridges around their eye sockets (we do, too; they’re called our eyebrows and cheekbones).

Note the limbs, their shape and where they start. I’m not sure where I figured this out, but at some point in my horse-drawing career, I discovered how their skeletons worked, and where their limbs actually started on the body. What I was doing here reflected my understanding of that unicorn’s internal skeletal structure. I understood that horses had bones, and that those bones affect how the different body parts look. I was starting to go from the idea of a two-dimensional horse to a two-dimensional representation of a three-dimensional creature.

What do I mean by that? Check out the hooves. That whole foot area. Isn’t that nasty? I thought it was acceptable at the time, but that’s because I was still thinking of that area as a two-dimensional thing. The hooves in the picture have about the right shape, the whole foot region is going in vaguely the right direction. Saying “I’m going to draw a picture of hooves” and “I’m going to draw hooves” are two very different things. The picture of hooves looks about the right shape, but it’s flat. You know that there are hooves there, but they’re not alive. That’s the difference.

Now. Look back at that first picture I showed you. Look at the ears, how they’re still triangle-shaped, but now they look like they’ve grown from the skull, and those extra-sexy nostrils with their irregular, but vaguely oval shape. And that eye ridge. Definitely present, yet subtle.

Look at the limbs, how they convey the skeleton beneath them without looking like convoluted sticks stuck into a sandbag. See how the horse is alive. How I drew a horse, not a picture of a horse. Feel the hardness of the hooves, the light breeze in the mane, fetlock, tail and feather (the stuff above the hooves). Anticipate that horse’s next step, and watch the muscles move as the legs continue into the next beat of a trot. Listen to it breathe.

An art critic might look at it and tell me that it’s crap. I would politely reply that it’s good crap, and I made it. And, the next time I draw a horse, I would make it better because I wanted it to be better, not because the art critic thought it wasn’t good enough.

I have every right to be proud of that horse.

In 2003, when I got that sketchbook from my mom and drew a couple of horses, I had every right to be proud of the good crap I made. It was the best I knew how to do. Not only that, but I had made a leap in my understanding of what I was doing, and I had incorporated that leap. I had allowed myself to do something different. When I drew the unicorn, I had pushed myself to do better, to create better. And I had allowed myself to take risks while I did so. Nine years later, here I am with a horse I drew that takes all those things I learned prior and makes them light-years better than I was capable of before.

I am becoming who I already am.

I’m a writer becoming a writer. The stories I write are on the cutting edge of what I understand about story. My most recent leap in understanding has to do with endings, and how to write endings that work, that stem from the beginning and middle in such a way that the story is one, whole thing that tells itself over time. Let me tell you, my endings are going to look a lot different from here on in because of this, just like the ears, eye ridge and limbs did when I learned more about them.

I’m also a blogger becoming a blogger. At the beginning of this year, I realized that I needed a purpose to make this blog better. Not because some blog critic came and told me that my blog wasn’t good enough, but because I want to be the best blogger that I can be.

So, I’m going to make changes from time to time to how I blog, to reflect my new understanding of how blogging works. Sometimes, I’ll tell you guys about the changes, but sometimes I won’t. It’ll just happen, and something will be different, and that’s okay. I think I’ve figured out my purpose for the blog, and it’s really just my journey of becoming who I already am.