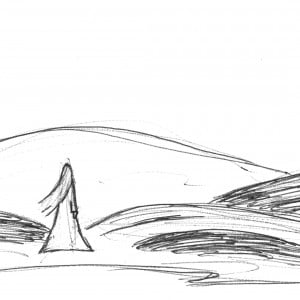 I stood on the surface of Mars to the sound of classical music
Dry desert all around me
the red dirt dotted with brown rocks and nothing was green
and I wanted it to be
The one therapy session I ever had
I told the therapist about the problems I had finding and keeping friends
So we went down through the music
and I was on Mars
there were no plants because there was no water,
I told her
But I had seeds in my hand
I really wanted to plant them somewhere and watch them grow
I wanted to turn Mars green
so green we’d have to name it something else
it couldn’t be a god of war anymore
but a god of life
but the barren landscape offered nothing for me
there was no soft earth ready to be filled
only hard rock and never-tilled soil
and no water
but I wouldn’t be bored, I told her
it was a whole world to explore
I told her that before I found the stuck Mars rover
and it gave me seeds
and I found I wanted to change Mars
I was alone and didn’t want to be
It was dead and I wanted life

Mars was dead and dry on the surface and it was dead and dry underground
but underground there was a city
a ruin
covered in bioluminescent… animals? plants?
Something in between
Fungi between the buildings
And, above, there was a thick pane of glass where people pressed their faces
they wanted in
but they wouldn’t force themselves
and I wanted them in
I could tell they wanted to enjoy the sights
but I was so, so scared
I told the therapist that I was afraid they’d try to change things
clean it up, make it a proper urban dwelling place
but that time was passed
I wanted this wild garden
this riot of neon colour
this passing on of something old that was good into something new
that’s good, too
but it wasn’t really new, either
it was what I was trying to make all along
the thing about ruins and the growth that comes after is that you have to have the city first
it’s a long, weird, unintuitive journey
when you think the thing I’d built
was the thing I meant to end up with
but watching growth and change in process
even if it means something becomes only to die
maybe that’s part of the process
I don’t want to hold on to a city I only meant for a tool
a step on the way to my goal
I didn’t want people to clean off the graffiti and uproot the mushrooms
repair the buildings
straighten the roads
I was afraid they would turn this wonderland inside
into something… wrong
so I kept walking and didn’t let them in
even though I could have
and came across a pool

another contradiction there, water on Mars
when I’d said repeatedly there wasn’t any
and here there was, lots of it
the continuity on this planet was sadly lacking
and I wondered what my therapist thought of it
something bad, probably
except probably not, I reminded myself
but I can’t read her mind
all things considered,
it could still be something bad
and I dove into the water
that deep, deep volcano shaft
dead volcano, smoothed out lava tunnel
filled with water
and many very surprised angler fish
that weren’t entirely sure what to do with the fact
that I was slowly sinking past them
to the centre of the planet
they gaped at me and it was funny
I giggled as I waved at them
said hello
and they said hello back to be polite
but they were very flabbergasted
looks like I would be the topic of conversation that day
“can you believe it, a human?”
“Are you sure it was a human? I hear they don’t come on Mars often”
“We’re anglerfish, dear. We don’t come on Mars often”
“Well, if you didn’t want to move here, why didn’t you just say so?”
“Oh, is that how it is?”
“Yes”
“I love you, too”
and marital peace is restored
anglerfish sure can gape, though
And down I went, past whatever kept the water up
physics exactly as suspect as Minecraft’s
and there I was, a water-ceilinged cavern
perfectly round
just a few inches above my head
and, ahead of me, another hole
this one covered in glass, too
and, inside, trees
a whole forest of pine
stretching out to infinity
another world
not inside Mars
an actual entirely different world
dimension
like the wardrobe
walking in here would take me away from all of this
but the only way to remove the glass
was to also remove the glass that kept the people from the city
they were connected, you see
either they both existed, or they both didn’t
there was no other way
and there was no way to make them flicker out and back in
if I wanted to enter that forest
I would have to drop
and I wouldn’t be able to reach the glass again
(and it wouldn’t matter, anyways)
The session ended there
me, crouched on the edge of the hole
staring through the glass like a child at Seaworld
I couldn’t tear my eyes away
and as much as I wanted to be on the other side
all I could think of was those people trampling my city
and me gone, unable to tell them anything
unable to explain what the city was supposed to be
unable to protect it
unable to stop them from changing it
and I couldn’t convince myself to remove the glass

and I wonder when I will be brave enough to fall through.

I wonder when Mars will be green again.

And why I was given those seeds when I don’t even know where to plant them
anyway.

Poem 2: There are Wolves in the ForestPoem 3: The God of Life