Meet Liana Brooks, Lover of Colourful Socks and Writer of Books with Many Dead Bodies 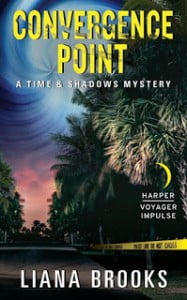 Liana Brooks has a new book out (Convergence Point, aka book two in the Time and Shadows mysteries) and said on Twitter that she was getting bored with how many times she answered the same questions for interviews for the blog tour. I offered to ask her a whole list of entertaining questions you’d usually never get in a blog tour, and she liked the idea. Thus, this interview was born.

1) What is the weirdest thing you researched for Convergence Point?

Probably the decay rates of a human body on a beach. I was trying to figure out what my characters would need to determine time of death, and that’s pretty squicky.

2) If you could live the life of any of the named characters in the story for a day, which would you pick and why?

I think Detective Altin has his life together. He’s not a major player in Convergence Point, but I think it would be nice to vacation in his life. It’s routine and mundane, but he gets the job done and has a loving family to come home to.

3) If Sam and Mac (the main characters) were animals, what animals would they be?

Sam is a mongoose. She’s cute and fluffy and horribly underestimated, but back her into a corner and she’ll rip your face off.

Mac is a tiger, maybe? He’s territorial, intelligent, and scary when he wants to be, but he’s perfectly content to eat free food and nap on the couch all day.

4) Suppose someone took the Time and Shadows series and tried to make it epic fantasy. Why wouldn’t that work?

The whole series revolves around quantum physics and genetic engineering. I suppose you could magic a clone into being, or use magic to travel through time, but you still wouldn’t have the parallel timelines or iterations.

And Sam just wouldn’t work as a fantasy heroine. To survive there you need to be a very strong woman. You have to be able to fight off bandits and trolls, but Sam isn’t a fighter, not in the physical sense. She doesn’t fit into a D&D designation.

We both like to cook and we both have big dogs. And we both try to talk our way out of problems rather than hurting someone.

Well, I wasn’t born in Canada and I’m not Catholic (my best friend in grade school was both). I’m not a mixed-race Latina (my best friend is). Absolutely no government agency in the world would ever hire me. And I do not run for fun. Ever. It makes sense for Sam, but I just don’t enjoy running.

7) From whence did you acquire your love of colourful socks?

When I was in middle school and high school a lot of the girls had fancy socks. Colorful, decorated, frilly… but I didn’t because we were on a tight budget and 90% of my clothing was hand-me-downs from my mom’s co-worker’s niece. I had generic white socks that usually had a hole in the heel. There was nothing wrong with them, but they weren’t share-worthy.

When I headed off to college the first thing I did with my first paycheck was buy a shirt that wasn’t black, white, or gray, and a pair of hyper-colored neon socks. I don’t even remember if I wore them. I was in Florida and sandals were way more practical. But whatever. I had colorful socks and I loved them.

Years later when I joined Twitter I realized I needed an avatar and I hated all the pictures I had of myself, so I jokingly put up a picture of my rainbow socks. Someone commented on how they only followed me for my socks and the rest is history.

8) If your life was a painting by Salvador Dali, which painting would it be?

9) What are three things you like about living in Alaska right now?

10) If you could have a dead author come back to life just to read Convergence Point (and The Day Before, so they wouldn’t miss the context the first book provides), which one would that be and why?

Isaac Asimov seems like the obvious answer next to H.G. Wells, but I think I’d want Alexander Veltman to read the Time & Shadows series. He’s the V in N-V Nova Laboratories where most of The Day Before takes place, and he’s one of the early pioneers of time travel fiction. I’d love to see what he thinks of being in a book.

11) Lie to me for this answer (as ridiculous a lie you want): Where did you get your inspiration for Convergence Point?

I was riding my pet Megalodon, Hera, when a body dropped out of the sky into the ocean and I realized it was impossible for it to have gotten there. We have no flight paths over my secret ocean lair and the unidentified corpse was wearing a very snazzy watch. Now I know it’s an Apple watch, but that was before they announced it so clearly this person had fallen through a rift in the space-time continuum. I had my minions dissect the unfortunate corpse, but gained no answers except for a scribble of smeared ink that seemed to spell the word SAM.

Of course, my best friend is named Sam, so I called her up. She denied being involved with any secret government agencies, doing black ops work, or having run missions in Area 52, but I’m good at detecting lies. My superior intellect quickly put it all together and I decided it was in my best pecuniary interest to publish my findings.

The reason the ebook sells for so cheap is that I have two covert agencies paying me hush money. It’s evil and villainish, but it covers the rent.

12) Would you let your children read Convergence Point? Why/why not?

I would. I think my oldest daughter might have read The Day Before already. As a rule I don’t write anything I would’t let my kids read because I know the print book will be on the shelf for them to pick up at any time. There’s no sex, limited swearing, and the gore is understated. My readers have good imaginations and I’m sure they can fill in the blanks.

13) Think of all the normal book tour questions you get and pick the one you like answering the most. Now, don’t tell me the question. We’ll leave that tantalizing bit of information for readers to find out for themselves. :) What’s your answer to it?

“Everything inspires me. A phrase, lyrics from the song on the radio, warm blankets in winter, a side character in someone else’s book, the real life stories of people I meet…there’s story fodder everywhere.”

The Time and Shadows series asks what it means to be human, and it does so through a sci fi mystery involving clones, time travel, and a lot of dead bodies.

Note: This is all I have so far of an experimental sci-fi story code named Virtual Girl. Expect it to be confusing. Faded chalk art

Interviewed by a Mysterious Stranger

A few days ago, I got this Twitter notification: I did a triple-take. Checked out their profile. And followed them back. With a username like

The Art of Goofing Off: Episode 7

Big news: On August 5th, I’ll be starting a Kickstarter for my next book, Like Mist Over the Eyes. For more information (and a handy