Last time, the original idea for The Illuminated Heart developed from “a fairy tale with zombies” to “A Christian Icelandic girl goes away with a polar bear to save her family from poverty, screws up and gets the bear into huge trouble, then goes and saves him. Also zombies.”

Which is what one might term as “progress”. But I still couldn’t seem to start writing the darn thing. Something was missing, and I didn’t know what it was, only that I had these questions still left hanging:

It was time to research.

Research, the use of internet for

To answer those questions, I decided to go at this sideways and research Iceland first. Here’s a (very) short list of the topics I ended up researching:

A lot of this material made its way into the story. Like. A lot. It also helped me nail down the time period to sometime after the first translation of the Bible into Icelandic that included the book of Isaiah (passages of which are quoted a number of times in The Illuminated Heart).

The coolest thing by far wasn’t really any of this information, but the pictures I found of hills in Iceland. For example: 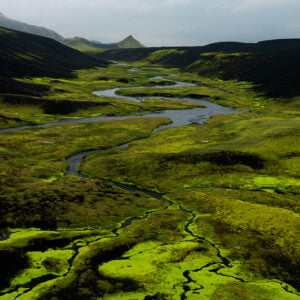 The scene in Chapter One where Dagný (I chose her name because it looked super cool, and loved it all the more when I found out it means “new day”) yells at God in the hills outside her family’s farm wouldn’t have happened if not for pictures like these.

Now, the Iceland stuff was all really cool, and that research continued all the way through writing and editing The Illuminated Heart, but what was even cooler was what happened when I finally turned my attention to zombies.

Research, the use of friends for

First off, I didn’t want the zombies to be like the ones we’re familiar with from zombie apocalypse stories. A) They seemed far too impersonal for this story, and B) they don’t really fit well in a fantasy/fairy tale setting.

I pulled out Google, and looked up revenants, voodoo zombies, various undead creatures, vampires… nothing seemed to fit. So, not even thinking it would work, I typed in “Viking zombies”.

Draugur (plural: draugar, possessive: draugs)
A mostly solitary undead creature of Norse mythology, it can be enormously strong and fast, it casts spells, tells the future, kills livestock and crops, and can cause madness. The name and case forms used here and in the book are Icelandic, much to the confusion of my editor.

How perfect is that?

But a description of a creature isn’t very helpful in telling you how to use it, so I tried to find stories with draugar in them, for context. Alas, my Google-fu failed me here.

Thankfully, a good friend of mine was taking a class on Old English (think Beowulf, not Shakespeare) and she found a couple fantastic things for me to read while researching for her papers. They were:

With question #2 finally answered, the idea had now come from “fairy tale with zombies” all the way to:

“A Christian Icelandic girl goes away with a polar bear to save her family from poverty, screws up and gets the bear into huge trouble, then goes and saves him from a draugur queen.”

I sat down to write.

There was still something missing, something utterly crucial, something I never saw coming.

And that was the story’s heart.

…this will continue on Monday. The post after that will be Launch Day. Let me know in the comments any questions this post brought up, anything about the story that you’re curious about. I would love to know what you have to say.

A Big Huge Important Note That You Don’t Want to Miss:

(and to get some cool bonus stuff)