The Past is Dead: Walking out of Shame 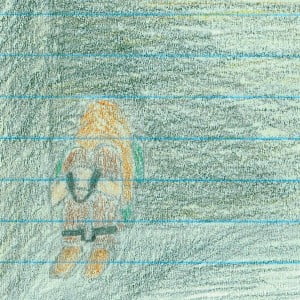 There was a time where I would have preferred being bullied to being invisible.

I don’t think I ever was invisible, but when my self-esteem was low, I sure felt it. Invisible, unheard, ignored. As far as I was concerned, any kind of attention would have been better than no attention.

Yesterday, I had an interesting conversation on Twitter about which was worse: being invisible or being hypervisible as a teen.

Our conversation got me thinking. What would have happened if I’d been overtly bullied? If I’d been thrown insults at, had nasty things written on my locker, worried about what people would say about every detail of my appearance?

It wasn’t a pretty picture.

My self-talk can be awful, and when I was a teenager was no exception – a statement I’m fairly certain we can all relate to. On the days when I felt so invisible I wanted to cry, my self-talk would tell me all the ways people probably didn’t like me. It was awful but not, as I rationalized, because those things were hurtful, but because no one said it out loud.

I wanted people to say what they thought out loud.

And I wanted it because I was convinced that I’d find my self-talk was true. Because, if it was true, I could stop fighting it. Rather than struggle against it and try to find hope instead, I would be able to give up, give in, and let myself be who I’d been telling myself I was for so long. I would be able to rest.

There’s a series of dreams I’ve had almost my whole life that follow the same basic storyline.

Like most of my dreams, I play a character in them, and this character is a girl with some kind of power or powers. Because of these powers, evil people would chase me and try to capture me. Sometimes they did and I would have to try to escape and defeat them.

As I became a teenager, the plot developed, where the evil people would try to get me on their side, either by force or a kind of seduction. In more and more of these dreams, I would succumb to their influence, and my abilities would be turned to terrible purposes. But it was never right and I knew it so, as time went on, I began to resist them.

Only once have I ever had a dream like this where I regained hold of my true power again and utterly defeated the shadows that had tried to pervert it to their ends.

I wanted to write a story based on these dreams, especially the last one, but the method of victory has eluded me. I felt drawn to the middle, where I was under the sway of evil.

Until yesterday, as I pondered my morbid fascination with being treated like dirt.

The way I’d convinced myself I’d feel if I was bullied was the way I felt in dreams when I’d given myself to evil’s power. It made me think of Lilly’s character arc in Eve and my emotional connection to it.

Whether being invisible or being hypervisible is worse is still up for grabs.

Frankly, it’s a competition that I think is pointless.

What I’m far more interested in is that dream where I triumphed over darkness. I’ve talked in previous blog posts about how I went through depression, and I talked about my healing from it in a guest post for Joanna L. K. Moore.

I am healed from it; that has never been the question.

But, from how I reacted in that Twitter conversation, from what it dredged up in me, it’s clear that it’s time to learn how to live without the crap that depression kept pumping into my brain for me to stew in for over a decade. And I am so ready to learn it.

That dream story’s got to get written, after all. :)

What’s a new way of living you’re learning to step into?

This post is a part of the Bravery Blogging Project, a challenge for bloggers to write about IDEAS: original, deep, and real perspectives, stories, or lessons.

To eschew the fear of unsubscribes and negative reactions and to say what we really think.

For more of the work in this challenge, search the hashtag #braveblogging or click on the image to the left.