Thinking with Your Fingers 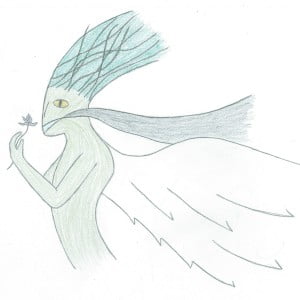 Poetry is never so hard as prose
you have to make grammatical sentences in prose
prose has to make sense
in a poem, you can write whatever
make non sequiturs
talk about things that aren’t real
and things that are real
in the same line
and no one cares
it’s poetry:
so long as it sounds difficult and maybe has some symbolism
it’s deep
(maybe I should have stuck a tree in there
large branches and metaphorical fruit
something something flowers hope something something
there: quota satisfied.)

Poetry is thinking with your fingers
How do you know where the line ends?
You just… do
you feel it more than you think it
breathe it in
breathe it–
out
Like that
and sometimes you breathe out a lot more
and sometimes you have to take a few little breaths in between breathing out until you release
exhale
inhale
All it is is a lot of pretty breathing
and I like it
so I guess that’s what matters.

Prose is a lot more formal
Clear definitions of boundary and the interaction
Of semantics
Syntax
(Grammar)
Commas have to make sense
(Rebel, young commas, rebel!)
It’s like an interlocking puzzle
And I love puzzles, don’t get me wrong
I like that contrast between real and not real
But poetry
poetry is the line between
the thing that dances from black to white and teases the grey insides
people understand that poets make up words
and break rules
to make their own rules
(and then break them again)
I’ve said that poetry is the closest to how I think
and it’s true
my brain doesn’t make paragraphs
it makes verses
and giggles when they sound like prose
because it knows what’s really going on
writing a story is glorious and gets into someone else’s head
but writing a poem is all in my head
(or outside of it?)
(you’re not in my skull, but you are in my mind)
(see what I mean about dancing along the boundaries?)

But no one ever taught me to write poems like this
Rhyme, rhythm, meter
Syllable count
Form and structure
Anthropomorphization and the tools of rhetoric
I have no idea if I’m using any of it
(well, I know none of this rhymes)
and so I wonder, small inside
what if this is really nothing?
what if someone who really Knows Poetry
reads this
and turns up their nose, saying
“Well, she obviously has no idea what she’s doing
obviously
this isn’t poetry
she’s only pretending and hoping no one will notice too long”
and the problem isn’t that they might say it
the problem is I’m already saying it in my head
because people taught me stories
but not poetry
not like this
I’m thinking with my fingers
isn’t art supposed to be hard or something?
aren’t I supposed to have an idea of what the heck I’m doing?
carefully crafting stuff?
using words that are sort of dictionary-ish
(well, I did use anthropomorphization
and what a mouthful that one is!
typing it is like trying to say it
and you have to go back in your mind and think
“wait, did I write that syllable already, or does it come next?”
that’s what happens when we have a catch in our voice
in the middle of a word we’ve never used but which is the perfect word
and darned if we aren’t going to use it now
especially since we’ve already started and we’re not sure what other word to use
oh crap we’re in the middle of plan A and it’s tail-spinning and we have no plan B
ABORT ABORT
I CAN’T ABORT, I STILL HAVE SIX MORE SYLLABLES!)
This is my third poem in three days
which is sort of crazy
I never wrote blog posts this fast
Not even the short ones
and the poems keep coming
I’ve got another one waiting in the back row, started from the first one
(they’re making babies
they’re tribbles
dangit
why did I encourage them, again?
Oh yeah, because they’re cute and fluffy and they purr :) )

Not a sonnet, sestina, haiku, limerick
not even an abab thing
these verses are terribly inconsistent in length
I’m writing like I talk
it’s probably nowhere near as good as my other poems
(similarly ridiculous as they all are)
but, dammit
I’m thinking with my fingers
You don’t give that up
for the sake of propriety
I will be
even more undignified
than this.

(and, in case you don’t know that reference
because I’ll make references all I want and not explain them if I so desire
but the story is so great
David, King of Israel
finally got the Ark of the Covenant back
that thing that Indiana Jones went after
except the real thing
the thing that was made to house the presence of God
And David gets so freaking excited
he’s out of it with happiness
that he dances until his clothes fall off
like
how do you even dance like that?
and his wife sees him from the window of the palace and sniffs
how dare he, the king, be so undignified?
and David didn’t get everything right
he watched a woman have a bath on the roof of her house once
took her to the palace and slept with her
had a half-attack of conscience and ordered her husband go to the front lines of war
where he was killed, of course,
leaving this woman available
and David married her
like
dude
that’s messed up
and the prophet Nathan told him so
because
dude
really
and that wife’s not even the queen who sniffed
because David had multiple wives
anyways
the queen sniffs
“how undignified!”
and David gets this part right:
“I will be even more
undignified than this”
because while the queen was thinking about slave girls and lustful hearts
David was dancing before God
and what the queen didn’t get
was that the slave girls didn’t have her issues
and honoured what David did)

So I will be
even more undignified
than this
because this is poetry
and it’s not every day you find out
that you can think with your fingers.