To Win the Sea (a song of Erd) 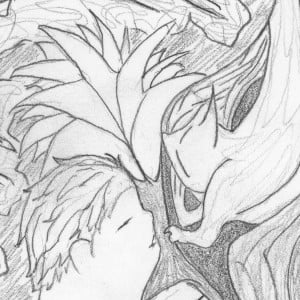 Because this is meant to appear within a story, it’s assuming you have some context. Therefore, context:

This is an Artlinder song and, in Artlind, they believe in two principal divine persons (gods isn’t exactly the right word, but it’s close), Brannig and Leiyiz. Brannig, more than an earth god, is considered to be both a divine person and also the earth itself, especially the mountains. Leiyiz, more than a water goddess, is also water itself, especially the sea. This song tells the beginning of their relationship.

Trivia not explained in the story:

To place affection on a shelf means to speak frankly, directly, dispassionately. Someone who has done this is about to tell you the truth, and you probably won’t like it. They’ve put their feelings for you aside.

An ern is a type of dragon that lives in the mountains along the northeast border of Artlind.

Oh, and yes. This is a song. Press play on the Youtube video above to hear it. :)

So Brannig came to her window
to her window
and sang she was his rose.
She only turned round in her bed–
he heard her snore below.