What Amateur Linguists Do For Fun

So, today I was totally going to write something serious and important or something, but then I got very distracted by playing around with a font I made yesterday. You see, yourfonts.com had a thing going on yesterday whereby you could make a font from your handwriting for free if you had the coupon code… and I had the coupon code.

The unfortunate thing is that I didn’t have any time to immediately play with said font, because homework was eating my life (thankfully, I can say without sarcasm that it was the funnest homework I’ve ever done, because I got to try deciphering Chinese characters and figuring out which English words several Japanese loan words came from based on what they sound like. This may not sound like your cup of tea, but it is totally mine \o/), which meant that I didn’t have time to play with it until today.

When I realized what time it was, though, I felt really bad that I hadn’t written you a blog post yet, and that I wouldn’t have enough time to finish one properly before I went to bed. So, I wrote you a letter instead (if you have a hard time reading it, just click on the picture or zoom in. It’s really not that illegible. I think): 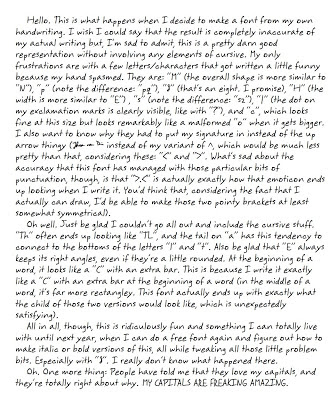 And here’s the font at a glance, in case you were curious: 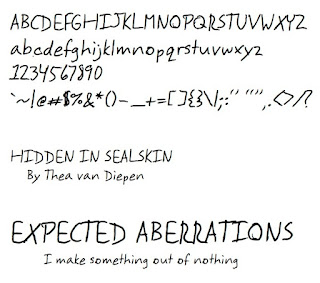 I wish I could have written something more witty or even slightly more informative on the subject of, well, anything other than that font, but I feel exactly like a kid with a new toy.
It’s interesting, though, how different it felt to be writing with my own letters on the computer. I feel like you’ve seen a part of my soul, and it’s an irregular, quirky, inexplicable part of it.
One of the reasons I think people feel safer saying so many things on the internet is because we can hide behind the fonts, the scripts that others have made for us and seem acceptable. They’re professionally designed to look beautiful and readable, without any kind of imperfection in their size or form. I wonder if, unconsciously, we try to portray the best (read: our fear-influenced idea of socially acceptable or entertaining or what have you) parts of ourselves through the internet simply because it’s so much easier to hide behind digital words.
Yet, I realized when I was playing with my new font, much as it will never write in a straight line and some of those letters look really, truly odd, I loved watching it appeared on the computer screen. I enjoyed so, so much that I could see myself on the computer screen for the very first time without having to peer behind the veil of a purely digital font. It was so freeing… so joyful.
My writing is messy, imperfect. And so am I.
And so are you.
And you. Are. Wonderful.