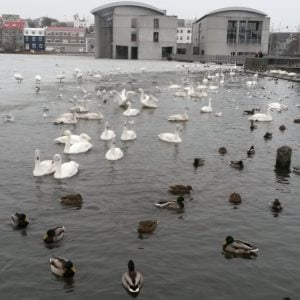 Did you know the entire country of Iceland is north of 60 degrees latitude, which means they only get about 5 hours of sunlight on the winter solstice?

Did you also know that Iceland’s old calendar only had two seasons: winter and summer? I think that calendar would accurately depict Alberta’s weather xD

Since it was tied with Finland for first after you voted, I bumped Iceland up to actual #1 with my own vote. Everywhere else, I knew someone and wanted to see them. Iceland, I went to because I had to know: did I depict the landscape accurately in The Illuminated Heart?

A Guest House Most Lovely

I stayed at a guest house I’ve now recommended to everyone I’ve talked to about Iceland. It’s called Chez Monique and it’s run by a French woman who moved to Iceland thirty years ago. She’s warm, friendly, and hospitable, and she speaks French, English, and Icelandic. We mostly spoke in English, but we did have a short exchange in French which I found thoroughly delightful.

This is what my room looked like (after I’d napped in the bed- I had so much jet lag going on, oh my gosh): It was a comfy room :) Breakfast is also provided, and there was an excellent selection of food- bread, cereal, cheese, meat. Even cucumbers and tomatoes :D The morning I had breakfast, I woke up in time for food, made myself a little sandwich, ate it, and then went back to sleep xD

Since I left so early on my last day there, Monique asked me if I wanted her to leave me any food for my breakfast. I requested an egg sandwich, and she made two, which excited me so much that I took a picture the night before I left (the skyr on the shelf above was mine I’d bought that day): Alas, I forgot my lovely sandwiches and my skyr when I left for the plane, and remembered only two minutes after I’d left the guest house, at which point the doors were locked and I couldn’t get back inside.

But let’s not shed too many tears for the food I didn’t get to eat.

Eat ALL the Food!

Google Maps is my official favourite travel tool. I used it to find a restaurant the first day I was in Iceland and, behold, my first Icelandic meal:

First meal (sadness of cilantro, some oiliness in sauce, but otherwise lovely and filling) It was wonderful and filling. I felt so good after I ate it :D The cilantro in the bean salad made me sad, but the rest of it more than made up for that.

Also, on the theme of Icelandic goodness, skyr. I was mildly queasy the entire time I was in the country, which I was informed was due to the water. It’s very clean (and the hot water is piped in straight from hot springs, so you don’t have to wait for it to warm up!), but there’s something about it that puts the stomachs of most tourists off just a tad. Which is where skyr comes in. I’m not a fan of yogurt. But, with the queasiness and knowing that probiotics are good for that (and because I wanted to try a quintessentially Icelandic food), I bought some skyr to see if it would help. And also Imodium, in case it didn’t.

Good news: it did.

The moment the skyr got to my stomach, I could feel everything inside of me relax. It was like my digestive system started smiling, which got me smiling. And which meant I could properly enjoy the spot I’d found to sit while I ate my lovely skyr. This lake (Reykjavíkurtjörnin) is right across the street from Chez Monique and, yes, it’s completely frozen in this picture. And gorgeous.

I was also a fan of the stonework surrounding the lake. Like, I love this aesthetic. I don’t even know why. The Birds of Iceland

A fun feature of Reykjavíkurtjörnin was the vast quantities of waterfowl. As far as I’m aware, none are native to the island. I read somewhere a while back that they’d been introduced for some reason, but I can’t remember why. At any rate, behold, the waterfowl of Reykjavik (and also downtown Reykjavik): My favourite part was watching various swans slip-sliding as they walked along the ice. There’s a strange sort of schadenfreude in watching a normally graceful creature be rendered awkward. But, then, who’s not awkward walking on ice?

A Private Walking Tour of Reykjavik

On the evening of my first day there, I did go on a tour to see the Northern Lights, but my camera wasn’t able to capture them. I don’t mean it didn’t do them justice. I mean it actually didn’t pick them up, since they were faint white lines across the sky.

So, in lieu of spectacular nature photos, I have pictures of some fun things I noticed as I walked around Reykjavik during daylight hours (only about 7 of those each day when I was there, which is what Edmonton gets in the dead of winter.)

This twisty little staircase a couple blocks from the guest house gave me story ideas. Don’t be surprised if one shows up in a later book or three. :D Also close to the guest house (I was downtown in a city of less than 100,000 people- everything is close to everything xD ), I found this cute little Christmas tree: Fun fact, Norway gives a Christmas tree to Iceland every year (except they almost didn’t in 2014). This is not that tree- the actual one is much bigger and more impressive. But it’s a lovely segue into the fact that Iceland has very few trees, a fact I discovered during book research.

When the Vikings first settled there, the island was 25% – 40% covered in forest. Now, it’s less than 2%, and there are active efforts to regain the lost woods (ugh, doesn’t “The Lost Woods” sound like such a great book title? I think that’s what I’m going to call the fifth book of the White Changeling series, assuming the Google search is favourable). I can’t help but wonder what the country would have looked like now if more of those trees were still around. I don’t remember what that building is, but it’s pretty.

Also, note the tree to the left. I know I took pictures of bare trees while I was there, but I can’t find them to save my life, so. What I wanted to point out was that I found it fascinating how the branches seemed to point upward in a way I’d never seen before. One of the things I’ve paid the most attention to on this trip are trees, and the shape of the ones I saw in Iceland were fascinating. My hypothesis is that they’re so vertically-oriented because it makes the most of the light. I also really wish I had a better picture of one of them so I could better show you what I mean xD

Aside from trees and buildings, I also tried to find some interesting things to see on purpose. Like important buildings or whatever. But I didn’t know how to look them up… until, and I kid you not, I remembered Pokemon Go. The Pokestops are usually on interesting landmarks, so I fired it up while I was in the guest house and used the game to scope out what might be cool to see.

Which is how I found this: I like to think of it as The Stoned Businessman.

Does Iceland Look the Way It Does in The Illuminated Heart?

“The sky spread over the hills, raked by thin, grey clouds that seemed to reach like claws from the distant mountains, carved of light and darkness in the face of the setting sun.”
~from the opening chapter of The Illuminated Heart

When I was writing The Illuminated Heart, I did a ton of research to make sure my depiction of Iceland was believable, at least on a surface level. One of the things I angsted over was the landscape. I did a number of image searches to get references I could use for various scenes, as well as to ground myself in the setting. Even after publishing the book, though, I wasn’t sure I’d done a good job with my descriptions, despite readers telling me they could imagine it vividly.

This was my view on the bus from the aiport: I depicted mountains far more than hills in The Illuminated Heart and, while I didn’t see any mountains my whole time there, I did see these interesting-shaped hills through the bus window: Out of all the pictures I took on that ride, this one best captures the mood I was going for in the opening chapter of The Illuminated Heart: If you’ve read the book, you’ll have your own opinion of how well I did. My verdict is that I more or less got it. Perhaps not as well as someone who’s lived in Iceland, but that’s to be expected. The general feel of the country was different than I thought, but I did capture details that are accurate of the landscape, which I was happy to find out.

That said, it’s probably best to think of the Iceland in The Illuminated Heart a fantasy Iceland anyways because, well, talking polar bear and draugar and riding the four winds to a land east of the sun and west of the moon.

This concludes the posts you voted for! Next week: Saint Mary’s Churches (a special post featuring pictures from the UK and South Korea!)