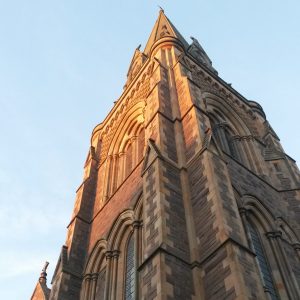 It all started one evening in Glasgow when I noticed it was the perfect light for photography.

One evening, I was on a walk near where I was staying when I came by St Mary’s Church. It was a beautiful building and, better yet, I noticed that the sun was at the perfect angle that everything in its path was gorgeous. So I took this picture: Lovely, isn’t it? I wish I could have gotten the whole church in that light.

Some days later, in Warwick, Piper pointed out a church to me, saying you could see it everywhere in town. They use it to navigate- you can always figure out which part of town you’re in by where you are relative to the church.

As it turned out, this church was also called St Mary’s Church. Even better, I discovered that there are a lot of St Mary’s churches in the UK.

What if I took a picture of one in every location I visited in the UK, at more or less the same angle I did of the one in Glasgow? Now that I had a side-quest to pursue, I made sure to find a St Mary’s church when I got to Bristol.

Bristol did not disappoint. Not only was the church another example of beautiful architecture, but it also had something inside which I can only describe as “Of course you’d find this sort of thing in a church in Bristol.*” (The alt text for that picture has everything from the sign in it, if you’re having a hard time reading the picture.)

Here’s the pendulum in action:

*I absolutely loved the atmosphere in Bristol, by the way: artsy, creative, and playfully intelligent. It and Reykjavik are my two favourite cities of all the ones I’ve visited so far on this trip.

In Hastings, when I asked Lizzie if there was a St Mary’s church there, she brought me to this Greek Orthodox church: Unlike most churches in the UK, this one isn’t usually open for people to use it or to look around. Lizzie has no idea when they have services, and no one seems to be there (except when they are).

A while back, she was invited to a funeral which was held at a St Mary’s Church in a different town and she went to this one by mistake. This was, as I recall, on a day when people were there and they informed her that, no, this isn’t the right church, and seemed rather eager for her to leave. No one was around when I was there, so I have no experience from which to draw conclusions, but I’m thinking aliens :P

When I left the UK in December, I thought I’d completed my quest. My plan was to write and publish this post after I’d put up all the UK posts.

Oh, to be young and naive again! My intentions were so pure xD

What happened, as we know now, was that I didn’t get to anything UK-related until last month. By which time I’d visited Seoul and discovered this church:

Cathedral Church of the Virgin Mary of the Immaculate Conception, Seoul (Myeongdong Cathedral)

Myeongdong Cathedral is one of the first churches built in Seoul and, like the St Mary’s Church in Warwick, was originally built such that it could be seen all throughout Seoul. Nowadays, there are too many skyscrapers for it to have that prominence, but it’s still an impressive sight. Before this trip, I’d never been inside a Catholic church before and, after seeing so many beautiful churches in the UK (St Mary’s and otherwise :P ), I’ve become fascinated by the art inside them. The stations of the cross (events leading up to and during Jesus’ death, burial and resurrection, pulled both from the Bible and oral tradition) have made for a good opportunity to compare and contrast. While the pieces for them all depict the same scenes, every church’s art has a different take. I found the stylization in the Myeongdong Cathedral stations particularly interesting. The church also has the following painting on one of the walls depicting a meeting of some of the first Christians in Korea- the man in blue is the pastor. From what I remember, they were the ones who built Myeongdong Cathedral. You never know what you’ll find when you travel.

This concludes the world tour posts until September 7th for Japan’s post. Tune in next week for something new I’m trying out :D